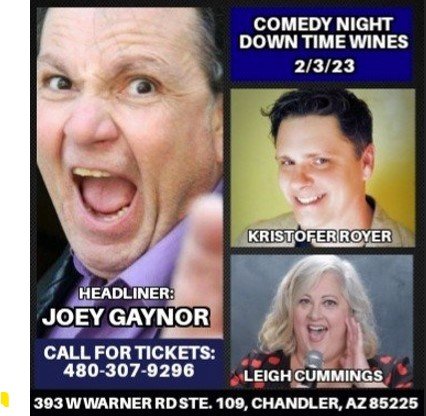 Come enjoy our February Comedy Night at Down Time Wines!  $40/person includes The Show, one glass of Wine and food.  Avoid the Valentines Crowd and take your date out on Friday, Feb 3rd @ 7pm.  Reservations and prepay required.  480-307-9296  Sorry no refunds for cancellations within 24 hours of the show.

Leigh Cummings has been delighting audiences with her high-energy stand-up comedy for years. She was born and raised in Tucson, AZ, but now calls the bright lights of Phoenix home. She was a semi-finalist in Arizona’s Funniest Comedian contest and enjoys performing for a variety of audiences.

Kristofer Royer is a native Pennsylvanian, current Gilbert, AZ resident, crazy cat lady enthusiast and a finalist of Arizona’s Funniest Comedian contest. His clever, and often self-deprecating takes on topics ranging from marriage to growing up Hillbilly have kept him in constant demand in clubs across the Southwest for the past 6 years. His first full-length stand-up special, “Thanks For Paying Attention”, is set release later this month.

Known for his singing voice and impressions, Joey Gaynor is an actor, comedian and writer living in Los Angeles via Newark, New Jersey. After eight years on the road, Joey’s break through came in the concert movie, “Comedy’s Dirtiest Dozen” with Bill Hicks, Chris Rock and Tim Allen. A regular at the Comedy Store, Joey’s performed with Richard Pryor, the Smother’s Brothers, Sam Kinison, George Lopez, Billy Gardell and many many others. He’s also appeared in the films “The Five Heartbeats”, “All I Want For Christmas” with Leslie Nielson, the documentary “I am Sam Kinison” and the most popular episode of “Unsolved Mysteries” ‘The Ghosts of the Comedy Store’. He’s appeared on numerous sitcoms, “The Parenthood” with Robert Townsend and “Boy Meets World”. He’s also appeared on drama series like “ER” & “House MD”.